Located on a strategic site in Surfers Paradise, between the river and the sea, Sora embraces its unique coastal environment through an architecture which both opens up to the views, and protects its inhabitants from the sun and wind.

The tower form sits above a tall lobby which relates to the scale of the existing Norfolk Pines on Thornton Street as well as its immediate neighbours. The entry lobby is a triple height space which sits behind a fine screen, creating a layered and sheltered entry experience and further mediates the scale of the building to the street. This an open ground plane contains a series of amenities and outdoor recreational spaces, both wet and dry for the residents. A separate wet entry is provided for residents with wash off facilities. Two mezzanine levels sits above that with more communal facilities and services. These would present as an active frontage to the street, creating movement, activity and passive surveillance.

The tower starts near the crown of the pines with the first apartment level starting at the tops of the canopy. The first few floors of the apartment have balconies with planters. This creates a landscaped façade closer to street level and provides filtered views to the surroundings. Above this podium level, as the views start to open up to the ocean and hinterland, the apartments have open balconies which embrace the outlook. At this point, the tower also sets back farther from the northern interface to provide greater separation from the existing apartment building.

The tower architecture is defined by a series of expressed slab edges which extend past the apartments and balconies to provide shading and shelter to the residents. The structural columns are then setback behind this horizontal edge; the horizontal and vertical members creating an honest and poetic expression of the built form. On the western façade, the core and services are hidden behind vertical screening and more vertical landscape.

The building is crowned by communal rooftop amenities which are a central, protected outdoor room flanked by two multipurpose rooms. All these spaces are protected by a soaring, simple, thin roof which covers the entire roof top.

The materials used in the building are primarily natural, hard wearing materials; these further the notion of an honest expression of built form; but also creates a surfaces which will wear well within the salty coastal environs.

The majority of the apartments are orientated east, with some to the north and south to take advantage of the view as well as protect the residents from the brunt of the afternoon sun. Horizontal shading from the slab edge as well as some additional vertical shading, particularly along the west, provides additional shelter. The landscaping plays an important role, both to create interesting and inviting spaces on the ground and roof top, as well as becoming an integral part of the architecture through planters on balconies as well as vertical landscaping opportunities on the western façade. PV panels will be provided on the roof to provide on-site renewable power generation also.

The project is a thoughtful response to its context – a built form which retains the existing Norfolk Pines at its base, works on a series of different scales through the building, and shelters its residents whilst providing views and amenity. Its architecture is a layered, yet honest expression of structure and materiality. 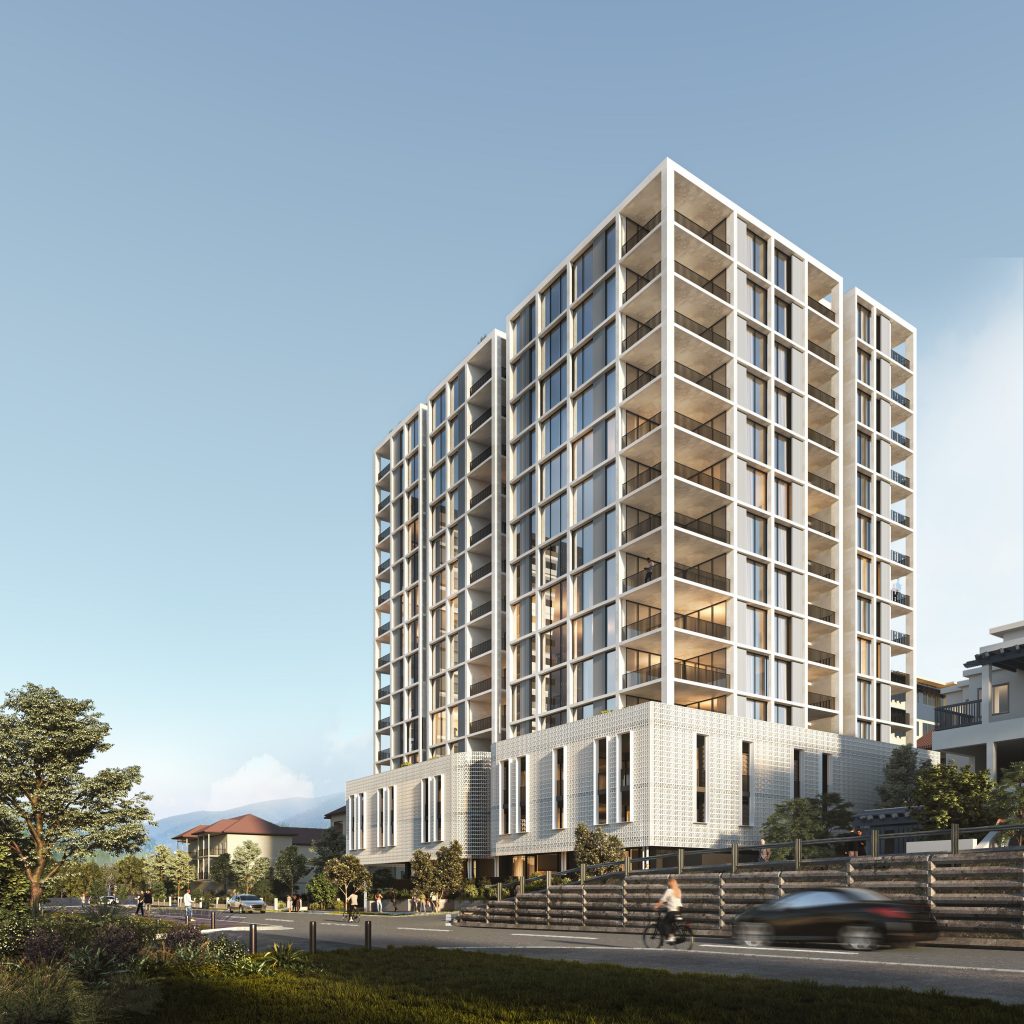 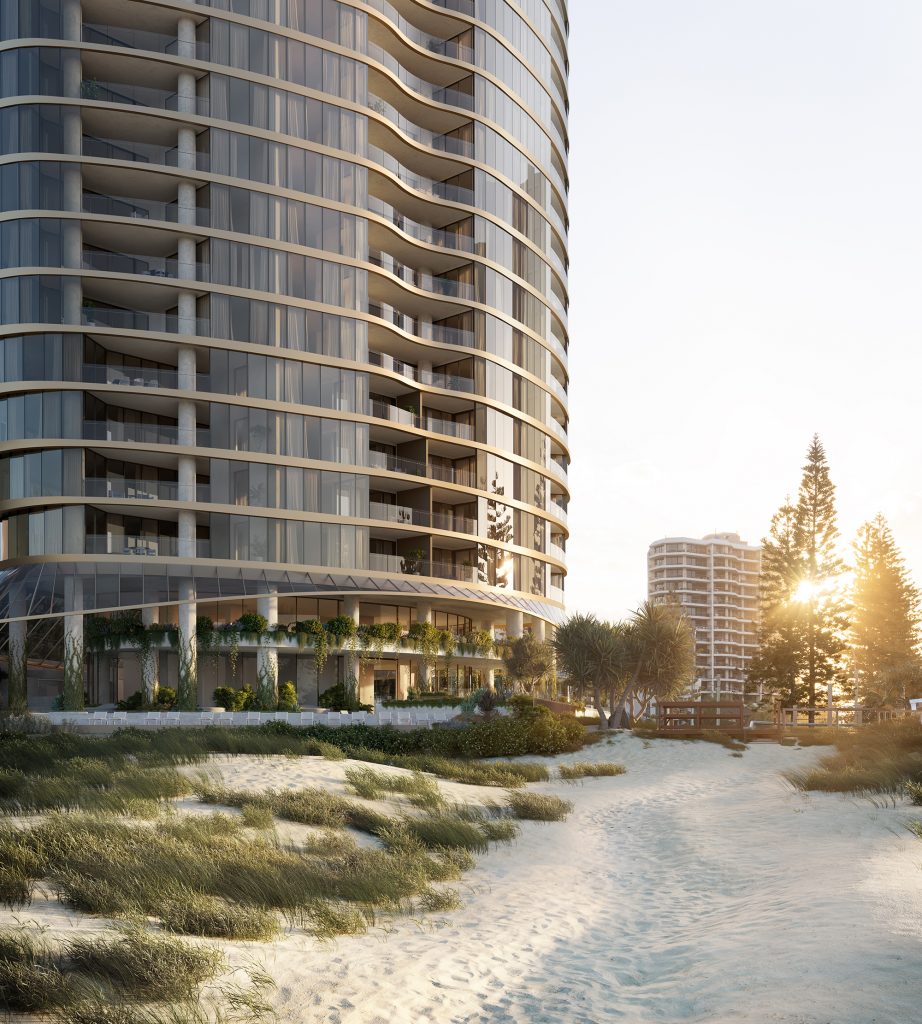 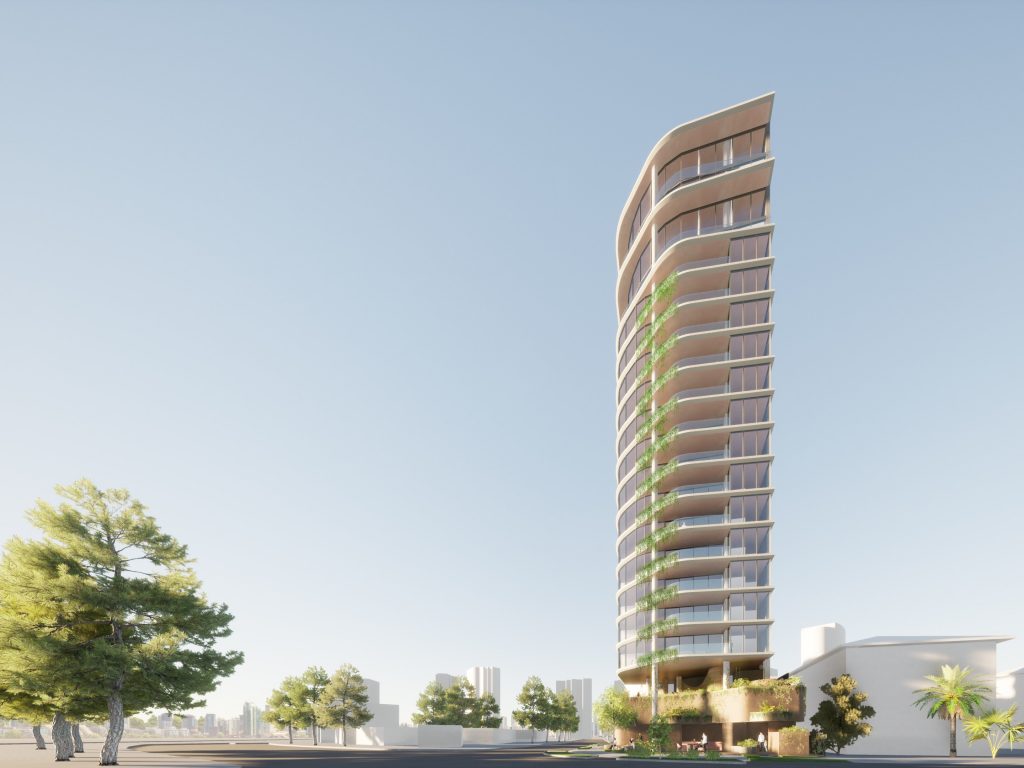